On December 22, 2017, Jason’s Deli was notified by payment processors that credit card security personnel had informed it that a large quantity of payment card information had appeared for sale on the “dark web,” and that an analysis of the data indicated that at least a portion of the data may have come from various Jason’s Deli locations.

PoS systems are difficult to secure, mostly because of their role and exposed location in the network. They handle critical information and at the same time require being managed from remote locations, a scenario typical of corporate environments that implement software package management solutions.

To comply with PCI DSS requirements, the payment card industry uses a set of security standards that enforce end-to-end encryption of sensitive payment data captured from payment cards when this data is transmitted, received, or stored. However, when the information is first read from the card, it can be found inside the PoS device’s memory in unencrypted form. PoS malware exploit this by capturing the payment card information directly from the memory; this behavior is known as “RAM scraping.” Several malware families that target PoS devices are known to exist in the wild. These families are
all widely available in underground marketplaces and have been used in various attacks.

What Should Consumers Do?

While consumers cannot control whether or not their favorite business establishments are secure against PoS malware, they can take some steps to ensure that their accounts are not put at unnecessary risk. 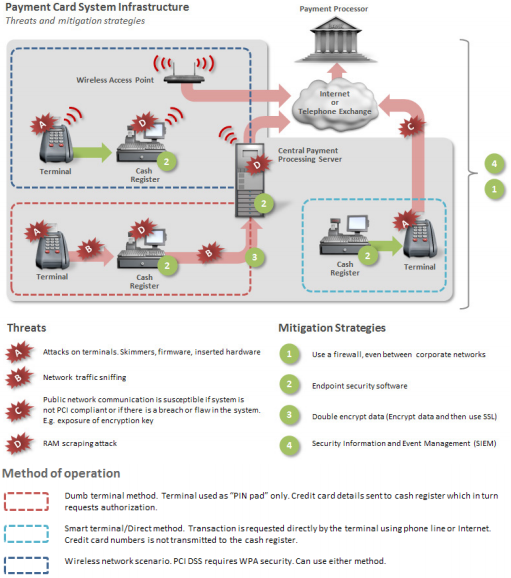 Maintain security policies and implement regular training for all personnel

Implement multi-layered protections including outside the CDE. Typically, the attacker needs to traverse multiple networks and layers of security before reaching a POS system. Any single layer that the attacker is unable to bypass prevents successful data exfiltration.

Increase network segmentation and reduce pathways between the CDE and other networks.